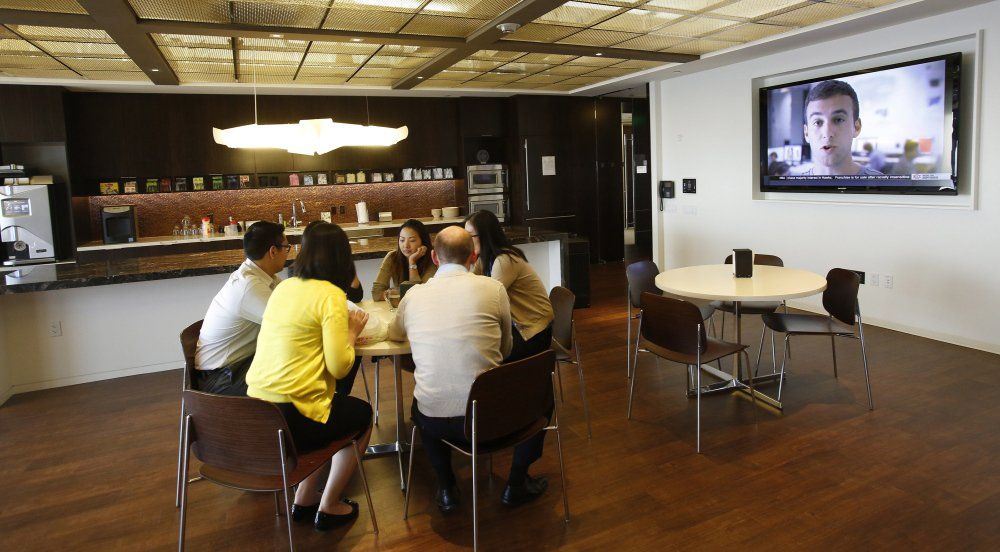 Progressive workplaces see value to a lunchroom that’s more than a fridge and vending machines.

For generations, office kitchens were hidden out of sight, an unloved necessity kept stark to ensure that workers didn’t linger.

Now some companies are seeing office kitchens in a new light, turning them into gathering showplaces intended to boost morale, encourage collaboration and impress clients.

Lawyers eat lunch at the law firm Morrison & Foerster, which has scaled back its library to create a communal hang-out space called the “loungebrary” in Los Angeles.

Lawyers eat lunch at the law firm Morrison & Foerster, which has scaled back its library to create a communal hang-out space called the “loungebrary” in Los Angeles. Anne Cusack/Los Angeles Times “At home, where does interaction happen? The kitchen,” said commercial interior designer Chris Coldoff, who tries to get people to do the same thing at work. “It’s about making personal connections: Starting conversations that lead to a lot of creative ideas.”

Showcasing the kitchen calls for a repeal of old attitudes at most businesses, workplace experts said. Historically, the office kitchen was a simple service function with a refrigerator, a coffee pot and some storage space.

“It’s a miserable space to spend any time, a closet with fluorescent lights, linoleum everywhere and unpleasant smells,” said Georgia Collins, head of workplace strategy for real estate brokerage CBRE Group Inc. “You want to get in and get out as quick as possible.”

But what if the kitchen were also a place where you could work?

At CBRE’s new headquarters in downtown Los Angeles, employees do not have assigned desks and can set up a workstation wherever they choose. Legal assistant Nicholas Watson likes to drop anchor at the hand-carved, 18-feet-long wooden table in the kitchen. It’s a pleasant space that provides chance interactions.

“Ordinarily, you wouldn’t be encouraged to mingle with people,” he said. “You get to learn more about other departments in an informal way and I can have impromptu, informal meetings with my boss. It really has become sort of a favorite spot.”

Law firm Morrison & Foerster had the same goal in its downtown LA office, where it created a space big enough for 80 people that was dubbed the “loungebrary” for its combined function as lounge and library.

The kitchen and lunch room are separated by a large sliding door from the library, which includes banquettes and other casual seating areas.

“It’s worked out just like we wanted it to,” said Gregory Koltun, managing partner at the firm. The space can be used for company meetings and social events such as wine tastings, but is more often simply a place to eat, work or hang out a bit.

“People bring lunch in more often because it is more inviting,” he said, “or they can leave their office and get work done in a comfortable setting.”

Visitors seem to be impressed with the space, Koltun said, and he makes it a highlight of office tours with potential recruits to the firm.

“It looks like a kitchen you could have in a house,” Angel Wou said as she ate lunch there with other associates at the firm on a recent weekday.

A big-screen TV is an office-wide draw during major events, such as soccer’s World Cup, said Carlos Espinoza, an associate in the firm’s litigation department.

“Whenever there is a big game on,” he said, “people come down.”

The trend of making work kitchens more inviting is about 5 years old, according to interior designer Coldoff of architecture firm Gensler, who created Morrison & Foerster’s loungebrary. And the firms that are paying for people-friendly kitchens tend to be ones that are perpetually competing for talent.

“For a lot of our clients there is new focus on creating spaces that bring people together,” Coldoff said. “Spaces that get them jazzed about interesting interactions and make them feel like the company is giving something back to them.”

Management interest in building plush kitchens often goes beyond making employees happy and impressing clients and new recruits, he acknowledged. Unfriendly kitchens have the effect of pushing employees out the front door at mealtime, something that financial trading firms and other businesses such as tech startups want to avoid because they need workers at their posts for long hours.

“If you can provide a great place for lunch or a snack it helps to keep them in the office,” Coldoff said.

*Abridged from an article by Roger Vincent, Los Angeles Times