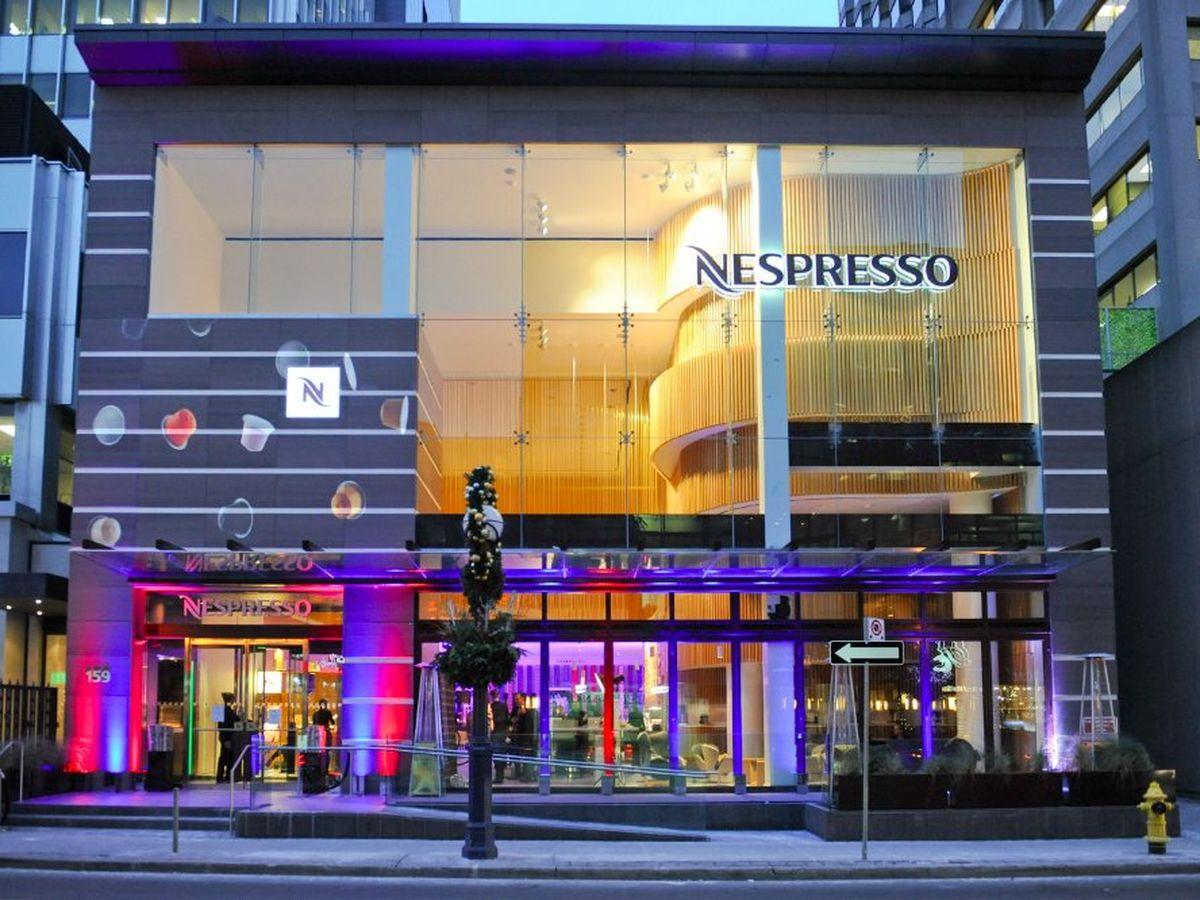 How grocery store brands explore the potential of full-fledged restaurants.

Walk down the aisle of any American grocery store and scattered amongst the usual gamut of brands, you’ll find products from popular restaurants. Taco Bell bottles its famous sauce packets (minus the cheeky sayings). P.F. Chang’s boxes frozen versions of its most popular menu items, like sesame chicken and shrimp lo mein. Marie Callender’s is probably better known for its freezer aisle comfort-food meals than for its actual restaurants, and even cult-loved Texas-based chain Whataburger is now selling grocery store versions of is popular sauces.

But what happens when brands, many of which are grocery-store staples, decide to leap from the aisle to the street — in the form of a brick-and-mortar restaurant?

A number of brands — including Chobani, Nestlé, and Barilla — have made the jump from product to restaurant. Popular Greek yogurt company Chobani opened a café in New York City’s Soho neighborhood in 2012 with, unsurprisingly, its yogurt front-and-center on the menu. Nestlé Toll House Café — which has 145 locations across the United States, Canada, and the Middle East — serves cookies, smoothies, and ice cream, the majority of which are made with Nestlé products.

These branded restaurants attempt to leverage grocery-store items into luxurious, upscale entities. But is it working?

The most recent brand to make the jump is Amy’s Kitchen. The vegetarian frozen food company, best known for its microwavable burritos and rice bowls, is now selling pizzas, burgers, and chili made fresh to order at the company’s new San Francisco restaurant Amy’s Drive Thru. Amy’s director of restaurant operations Paul Schiefer reveals that while Amy’s Drive Thru “uses some of the same supplies, growers, and chefs that had made our frozen food,” the menu is “pretty much from scratch.” For the restaurant, which is completely vegetarian like the frozen food offerings, the team held “over a thousand taste tests of the veggie burger alone, just to get feedback and fine-tune what we were looking to do.”

While restaurants offering grocery-store products is a way to make brands more accessible, these branded restaurants attempt to leverage basic grocery-store items — which are often not considered to be very chic — into luxurious, upscale entities. But it is working? Are these restaurants actually just one big, ongoing marketing stunt? Or are they viable concepts on their own? The answer falls somewhere in between the two.
First and foremost, these branded stores are another outlet for the companies to showcase their products. Shawnon Bellah, the COO of the Nestlé Toll House Café, says that nearly 60 percent of ingredients used — from La Lechera condensed milk to branded water — are Nestlé’s. At any given moment at Chobani’s cafe, there are at least 12 yogurt-based creations — both sweet and savory — on offer. Amy’s Drive Thru sells its popular burritos using the familiar Amy’s recipe, only freshly made. Nestlé’s high-end coffee-pod Nespresso has nine self-described “boutiques” across the U.S. that serve a range of coffee drinks, alcohol, and food. According to Nespresso vice president of marketing Davide Moro, the main focus of the boutiques (a word usually used to denote high-end, exclusive product) are the coffee pods, many of which are the same as what customers can purchase in stores and online. (Unlike Nestlé coffee, Nespresso pods can usually be purchased in “select fine retailers” as opposed to traditional groceries.)

“Anybody who walks by one of our cafés may not be 100 percent aware of the café concept, but there’s a trust factor in the Nestle brand,” says Nestle Cafe’s Bellah. Unsurprisingly, brands then use that trust factor to demonstrate, in-store, different ways the product can be used. While Chobani SoHo’s yogurt bowls feature the same product that consumers can purchase in stores, the café offers a number of yogurt bowls, like the Fig + Walnut (dried figs, walnuts, and a drizzle of clover honey) and savory takes like the Mango + Avocado (mango, avocado, olive oil, sea salt cilantro, and lime juice). Michael Gonda, Chobani’s vice president of corporate communications, also points out that “everything you see has our yogurt incorporated, from the spreads on our sandwiches to our baked goods.” The Mediterranean-influenced restaurant sells a number of sandwiches made on simit, a Turkish bagel-like bread, all come topped with labne — strained yogurt cheese — made in-house from Chobani yogurt. The yogurt is even found in the café’s dessert options, like a rice pudding.

The same goes for both of Nestlé’s restaurants. Moro notes Nespresso uses its boutiques — which can be found in cities like New York City, Miami, and San Francisco — to showcase how its coffees can be transformed into other drinks (the boutiques recently offered a peanut butter-and-jelly coffee milkshake). “You can try the drink in stores… and then we teach you how to do it, so you can do it at home.” Nestlé Toll House Cafés also makes a number of items recombining well-known products: Bellah points to the chain’s Nestle Toll House Frappé, which blends coffee with its popular Toll House cookies. However, while Nestlé Toll House Cafés share the same parent company as Nespresso, it uses Nestlé’s lower-end coffee line, Nescafé instead.

When asked why the companies created each restaurant, the spokesperson for each brand could not stop iterating — in terms loaded with brand speak — that the restaurants are meant to bring a “new experience” to customers already familiar with the brands. When a customer walks into one of the restaurants, the product is whisked away from the context of a grocery store, a place that people typically visit during the humdrum of their daily lives. Instead, they eat the product in a way that’s elevated — in the case of Chobani yogurt, it’s served a heavy glass jar, topped with “chef-created” fresh toppings, and covered with a rustic cheesecloth — and all of a sudden, it’s now an experience worth talking about. Essentially, the restaurants are attempting to craft a Pinterest-friendly aspirational lifestyle brand, through a mix of healthy and fresh-looking recipes, well-thought-out design, and luxurious ingredients.

The majority of the branded restaurants feature distinct design that help set them apart from the grocery store. For the most part, the spaces and packaging are Instagram-friendly in the way that their grocery counterparts are not. Chobani SoHo features a large glass windows, rich dark wood, and the yogurts are served in glass containers. Nepresso’s boutiques often feature wall art crafted from the colorful coffee pods and plush leather furniture. Amy’s has managed to give itself a modern and cheery makeover at the Drive Thru. Schiefer explains that the restaurant is contained within a “physically unique building,” which features a solar-panel roof, a water tower replica with the logo in bright blue letters, plenty of light wood, and large sunny windows. While the frozen meal packaging is quite dated — its more likely to appeal to those who love burnt orange and a ’70s aesthetic — the restaurant packaging is rife with bright colors and a bevy of stripes.

The lifestyle angle also allows brands to create and sell items that they can’t necessarily package and put in stores. Chobani created the simit sandwiches for its café, as well as yogurt cups with fresh toppings. Amy’s Drive Thru has a number of restaurant-only dishes, like fresh salads, milkshakes, and fries, none of which have previously been available as a frozen options. And in addition to monthly coffee drink creations, certain Nespresso boutiques also serve wine, and sparkling water, the ultimate benchmark of luxury.

However, just because the item was created for the restaurant doesn’t mean that it can’t end up on store shelves. Chobani uses its SoHo cafê as a test kitchen and “incubation and innovation hub,” as Gonda likes to say. He tells Eater that the company takes advantage of being able to directly interact with customers, testing new ways to serve the yogurt. If the recipe proves popular, it often “ends up on supermarket shelves.” One such item is the Chobani Flip, which is a container of sweetened yogurt, packaged with a combination of “crunchy” toppings that customers “flip” into the yogurt. Gonda notes, that “most of our Flips are inspired by creations at the café.”

Even though Amy’s Drive Thru has only been open less than a month, it has already inspired a new frozen item. Inspired by a customer that would top macaroni and cheese with the brand’s canned chili, Amy’s decided to add a chili-topped macaroni and cheese to its not-so-secret secret menu. While the chili mac “is not an ‘official’ restaurant menu item, it became a popular special request.” So much so that the Amy’s decided “to make a Chili Mac as part of our Amy’s Kitchen range that we are launching soon.”

So are these restaurants actually just one big ongoing marketing stunt? While the companies will say no, the restaurants provide a brick-and-mortar counterpart to a brand’s social media profile — edited, filtered, and presented at just the right angle. It is a version of the brand that really only exists in that one, heavily curated, place. And that’s just how the brands like it — so much so that the companies will continue to open restaurants. Chobani “definitely” wants to build more cafés, Schiefer admits that Amy’s Drive Thru is a concept the company wants to “take further,” Nespresso plans to “continue to open [boutiques] in major cities,” and Bellah reveals that Nestlê Toll House Café is “on track” to open 43 new locations this year.

Grocery-brand restaurants are clearly a financially viable concept and here to stay.

*Abridged from an article by Khushbu Shah, www.eater.com