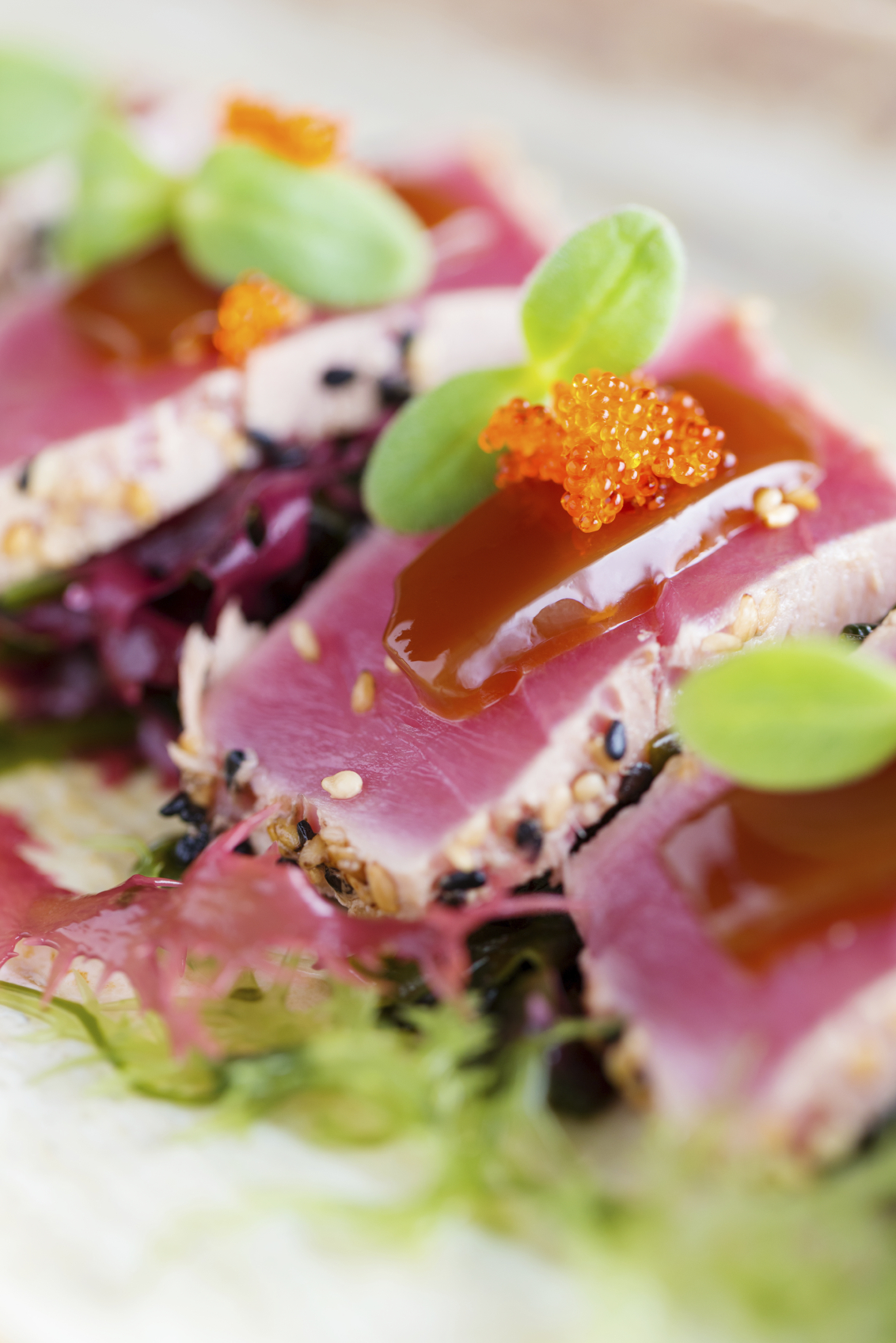 America is truly a nation of snackers: Adults in this country snacked on ready-to-eat foods more than 200 billion times in 2015, according to consumer research firm The NPD Group.

We snack so much that there are now three snacking dayparts in restaurants — mid-morning, late afternoon and late night — that together make up 18 percent of all restaurant dining occasions, according to NPD. That makes it one percentage point larger than breakfast in terms of number of visits. And that doesn’t count the many times when traditional meals are transformed from a sandwich at lunch or an appetizer and entrée at dinner to a flexible, sharable snack fest, or a lighter meal for the budget- or calorie-conscious.

The latter is happening at Genji Izakaya, a new restaurant serving Japanese snacks that opened on March 1 inside the Whole Foods Market at New York City’s Time Warner Center. The restaurant replaces a bar that served a meal-oriented menu of burgers, fries and the like.

Genji also operates sushi and ramen restaurants at Whole Foods Markets across the country. This is its first izakaya — a Japanese word that translates loosely as “tavern.”

The new menu includes sliders served on steamed buns for $4 apiece, filled with chashu pork, shrimp tempura, spicy chicken or tofu. It also offers quick bites for $3 to $7, including edamame, dumplings, a seared salmon “carpaccio” in ponzu, and a “taco trio” of spicy tuna, salmon and shrimp tempura served in shells of thin soy paper or nori seaweed.

Also available — and quite popular — are mini bowls of ramen for $9, which are about two-thirds the size of $11 full servings at the nearby Genji ramen and sushi restaurants.

“At lunch they usually order ramen and one other thing,” Neal said. “At dinner they’ll get a snack and a beer, and then maybe order something a little bigger as they linger, as you would at a typical izakaya [in Japan].”

Snacking revenue is on the rise at many restaurants, according to a study conducted in February by Penton Food and Restaurant Group, which includes Nation’s Restaurant News, and sponsored by Mondelez. The study found that 43 percent of restaurant operators saw an increase in revenue from snacks in the past two years, while 53 percent said snack sales were flat. Only 4 percent said snack sales “decreased somewhat,” and none said they “decreased significantly.”

Many operators have responded to the increase in snack food business.

“We take our bar food just as seriously as we do full-on menu items,” said Brian Landry, chef at Borgne, a New Orleans restaurant that is part of the Besh Restaurant Group. “We have lots of outlets where having great bar food becomes very relevant,” he said.

Bar snacks need to be quick, easy and approachable, Landry said, which at his restaurant includes catfish sliders served with a tartar sauce made with both dill pickles and bread-and-butter pickles. The sliders are topped with a green tomato chow chow, a Southern-style slaw that Landry makes by pouring a hot mixture of vinegar, pickling spices and turmeric over diced green tomatoes, cabbage, cauliflower and red bell peppers, and letting it chill.

He also does a take on turkey necks, a not uncommon addition to local crawfish bowls. He braises the necks in a traditional French mixture of mirepoix and red wine, chills them in the liquid, and rolls them in crab-boil spices and rice flour before flash-frying them.

“They get incredibly crispy and spicy on the outside, but they’re falling-off-the-bone tender,” Landry said.

The necks are finished with a glaze of housemade pepper jelly.

Landry also taps his bar menu, which he rotates based on what’s available, to use up trim from the dining room menu. For example, he’ll buy whole yellowfin tuna and use the loins for the restaurant.

“But there’s all this other meat on a tuna that we might not necessarily put center of the plate,” he said.

Instead, he cooks it with olive oil, garlic and bay leaves, smokes it over pecan wood, flakes the meat, and mixes it with cream cheese and capers for a spread that he serves with spiced potato chips, crackers or bruschetta.

“It’s a fun way for us to utilize the entire fish, but also to make a delicious snack that people can dig on when they’re having wine or delicious beer,” Landry said.

Dylan Fultineer agreed that snacks should be straightforward. Fultineer is the chef of Rapp Session in Richmond, Va., and its sister farm-to-table restaurant next door, Rappahannock. Both are owned by the Rappahannock Oyster Company, which farms oysters in Chesapeake Bay. The company opened Rapp Session in February to handle the overflow from its high-end neighbor, and to make that restaurant a bit more sedate.

Fultineer creates local, approachable food that people can relate to, like his smoked bluefish dip. He brines the inexpensive fish overnight with salt, sugar, dill, garlic and other aromatics, then hot-smokes it until cooked through. He flakes it and mixes it with crème fraîche, red onion, cucumber, dill and lemon juice, and serves it with saltines. The dip is one of his most popular items, he said.
Most of the bar food is priced between $2 and $8, but Fultineer offers a more substantial $15 oyster roll, which is his take on a lobster roll. He poaches oysters in butter and serves them on a brioche bun that he tops with his own chow chow, which he describes as “sort of a sweet sauerkraut,” and a housemade, fermented, green jalapeño hot sauce.

“Shareable, snacky items” will also be the focus of Columbus Tap, a restaurant slated to open in April at the Fairmont Chicago hotel, chef Atticus Garant said.

Another will be spread with smoked ranch — made by cold-smoking sour cream and folding it with herbs such as tarragon, oregano, parsley and chives into ranch dressing. The toast will be topped with pieces of rotisserie chicken, Nueske’s bacon, lettuce, cured tomatoes, lemon vinaigrette and herbs.

Garant said he is using sourdough and multigrain bread from local Publican Quality Bread for the toasts.

Other snackable items include artichokes that he treats like fried chicken — soaking them in buttermilk and then dredging them in spiced flour before frying them. He also plans to make “animal crackers,” a bowl of fried pork cracklings tossed in spice dust that reflects the flavors of Buffalo wings.

According to the Penton-Mondelez study, taste is far and away the most important quality customers are looking for in a snack: 52 percent of respondents said it was the most important characteristic, and 31 percent put it in second place.

By comparison, nutrition was only ranked the top choice by 2 percent of respondents, and 17 percent put it in second place. Most put convenience and price between taste and nutrition.

Nonetheless, Garant said variety is important, and he plans more healthful items to contrast the chicken-fried artichokes and pork cracklings.

They include a braised sunchoke salad with carrot, celery root and an olive oil vinaigrette, as well as charred broccoli with an “umami bomb” vinaigrette made of sundried tomatoes, capers, tomato powder, olive oil and lemon.

He is also planning a dish of roasted romanesco broccoli, for which he rubs the heads in compound butter, roasts them whole, slices them in half and serves three halves with preserved lemon, herbed relish and Parmesan cheese.

STK, a 13-unit steakhouse based in New York City, is taking a more indulgent route with its recently launched “Classic Hour,” which features classic cocktails and, at its downtown Manhattan location, not-so-classic sliders on weekdays from 6 p.m. to 8 p.m.

Bradley Day, chef of the downtown location, said the slider fillings include crispy char siu chicken with spicy Asian slaw, barbecue pork belly with a cipollini onion applesauce, tempura sweet-and-sour shrimp, and a vegetarian slider made with grilled shiitake mushroom and garlic herb aïoli, as well as a classic with white Cheddar and special sauce.

“Here I think it’s a little bit about variety and speed,” Day said. “It’s very approachable — not too far out in left field.”

Day said the restaurant originally required customers to buy two of the same type of slider for $10, but now it lets them mix and match and add extra sliders for $5 each, although they still require a two-slider minimum.

It’s not uncommon for people to buy slider tastings, Day said, which is one of each, and share them with a group.

*Abridged from an article by Bret Thorn at [email protected]