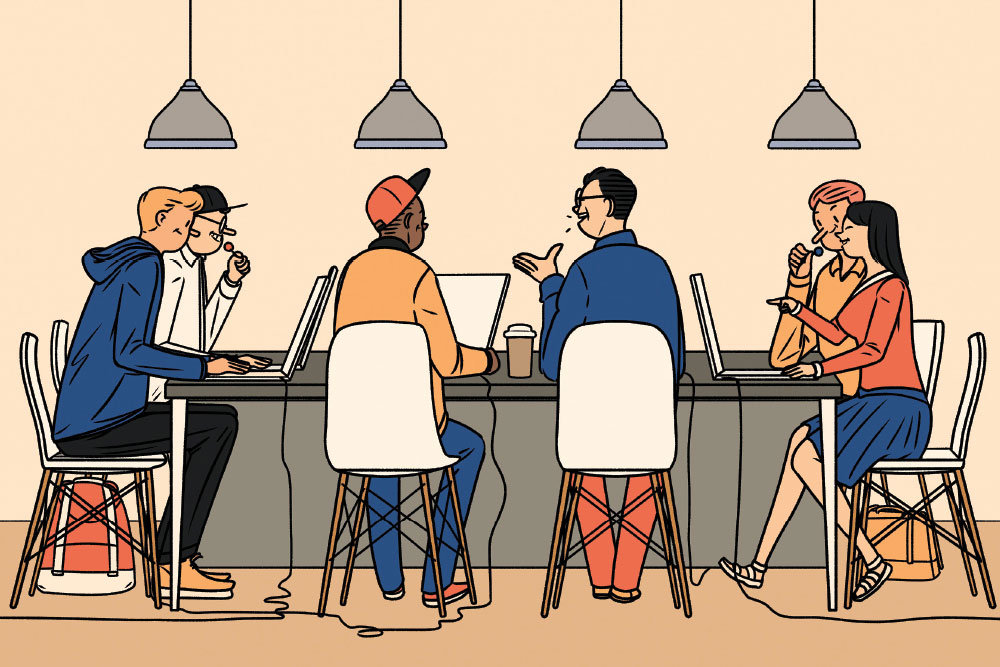 The office 10 floors above Connecticut ­Avenue in the Dupont Circle neighborhood of Washington, D.C., isn’t like most offices. For one thing, today this office has a Google-labeled ­minivan parked in it. In front of the minivan, employees from the Silicon Valley search firm are scooping candy from big plastic bins to give away to everyone who works here.

But free candy delivered by Google is not what is most unusual about this workspace. Most odd is that most of the people working in this office don’t even work together — ­although they clearly all love candy.

This is an office run by WeWork, a 5-year-old co-working company that leases space to over 25,000 members around the globe, most of whom are entrepreneurs, freelancers, and teams of small and midsize businesses.

The company has become both a darling of Silicon Valley’s tech establishment — which has invested a significant amount of money into WeWork — and a real estate powerhouse in Manhattan, where it is the fastest-growing lessee of new office space in New York. WeWork now leases a total of 3 million square feet of space in 41 different locations in 15 cities worldwide, stretching from Seattle to London to Tel Aviv, Israel. And yet, WeWork doesn’t think of itself as being in the real estate business.

“We’re in the business of making people happy and successful,” says 40-year-old co-founder Miguel McKelvey. “Our ­spaces are obviously a big part of that, but we think of what we offer holistically, in terms of what it means to work in the world today.”

To WeWork, and to many organizations that have shunned traditional office leases to work in shared spaces, what it means to work in the world today can be summed up in one word: collaboration. Workers at big companies have been hearing that word tossed about for a decade or more as their firms have plowed under the cubicle farms they planted in the 1990s in favor of more-open, less-private space for workers. As a result, 70 percent of office workers now work in “open-plan” spaces, according to the International Facility Management Association.

While big companies are still struggling to develop the right kind of collaborative environments — ones that foster creative co-working without sacrificing workers’ ability to concentrate on their daily tasks — small companies, especially startups, face a different challenge with collaboration. How do very small companies engage in meaningful, profitable collaboration when their office is someone’s living room or a coffee shop? And how do slightly bigger companies broaden their networks when the workers spend most of their time locked together in an office they might have leased above some dive bar?

What it means to work in the world today can be summed up in one word: collaboration.
WeWork’s solution: free coffee and beer. Well, it’s more than that. Occasionally, there’s also free candy. And ice cream. “There’s always something going on ­inside WeWork,” says Zack Christenson, a co-founder of ­Crowdskout, a data-­analytics company that works with small ­businesses and nonprofits and has had an office at ­WeWork in Washington, D.C., for 18 months. “Yesterday they had a food startup in here that was making small-batch ice cream. You meet a lot of people that way.”

For Crowdskout, which has grown from two to 12 people in the year and a half since startup, the most helpful meetings have been with other data companies and with nonprofits. “We’ve had a lot of informal conversations with nonprofits here about what their needs are, which is a huge help,” Christenson says.

This is why WeWork doesn’t talk about selling square footage. Sure, it leases large lots of office space, converts them into glass-walled, vibrantly decorated smaller spaces and sells use of that space to tenants, whom it only refers to as “members,” on a monthly basis. And, yes, its rapidly growing base of 25,000 members pay what, on a per-square-foot basis, can amount to a premium price over other office space in WeWork’s cities — anywhere from $45 a month for eight hours of access to ­WeWork’s common areas up to about $650 a month per person for a permanent, glassed-in office that is something like 65 square feet of space per desk. And, absolutely, because of that pricing, WeWork reportedly has a $150 million annual operating profit.

What the company insists it is really selling is not space but instead that thing small businesses struggle to be part of: a collaborative, easy-to-access community of peers and potential customers. A ­community that is available either during ice-cream breaks or through a Twitter-meets-­LinkedIn-style offering on WeWork’s app, where members post questions or list jobs.

“We’re not just abstractly applying a real estate growth strategy,” says ­McKelvey, who has an architecture degree and is chief creative officer. “We’re trying to authentically connect with our communities. At WeWork, you meet people with shared ­experiences. You even get emotional support, where you can find other people who understand the challenges of running a business. That’s all informal. It’s not measurable.”

McKelvey grew up in part in a collective headed by five single mothers in ­­Oregon. His 36-year-old Israeli-born co-founder, Adam Neumann, grew up in part on a kibbutz in Israel. So when he says he’s not trying to build a business but a community, it sounds genuine. “What a lot of us want is to find meaning in our work,” ­McKelvey says. “That can be a pretty ephemeral thing, but I think you really end up feeling the power of it when you’re in our spaces for a while.”

*Abridged from an article in American Way Magazine, read more at http://magazines.aa.com

Seeds are jam-packed with nutrients that are often lacking in our diets.

Contrary to popular belief, eating seeds in their raw form is not necessarily more nutritious than eating them roasted or toasted. “Cooking often helps to release or ‘loosen’ many food ingredients from their natural matrices such that they become more bioaccessible and bioavailable, explains Dr. Jeffrey Blumberg, Director of the Antioxidants Research Laboratory at Tufts University. “If you prefer toasted seeds to raw ones, then you will consume more of these healthy foods and ultimately derive more of these nutrients — and that is a good thing.”

The good fats that contribute to the seeds’ rich and nutty flavors also jack up the calorie count, so be mindful of the suggested serving size. Here we have highlighted the seeds that we think are tastiest, but these are certainly not the only ones with nutritional benefits. Besides using seeds to spruce up your salads, they make a great addition to soups, stir-fries and your morning cereal.

Pumpkin Seeds : Known as pepitas, these little powerhouses are loaded with all sorts of essential minerals such as manganese, phosphorus and potassium. They offer a substantial dose of magnesium: almost 50% of the daily intake recommended for adults. Jampolis says this is important because the majority of Americans don’t get the RDA of magnesium that they need. Maintaining an adequate amount of magnesium in our bodies helps to control blood sugar levels and blood pressure, and build bone density. Studies have shown that magnesium may even play a role in preventing migraines. Pumpkin seeds are also rich in tryptophan, an amino acid that our bodies use to make serotonin and melatonin: two hormones that promote relaxation and are key to getting a good night’s sleep.

The World Health Organization recommends eating pumpkin seeds as a good source of zinc, a mineral that plays an important role in cell growth and can boost your immunity. Eating pumpkin seeds along with their shells may offer the highest amount of zinc, but you’ll still reap benefits if you prefer them without the hulls.

Sunflower Seeds : Also packed with minerals like magnesium and copper, sunflower seeds stand out for being rich in B-complex vitamins that support a healthy metabolism and help form red blood cells. Just one ounce of shelled sunflower seeds also contains two-thirds of the recommended daily dose of Vitamin E, a nutrient that supports circulation and acts as an antioxidant, protecting your cells against damaging free radicals, among other potential benefits.

Hemp Seeds : Hemp seeds have not been widely available until recently and nutritional research has been scant, likely because of a misleading association with marijuana, it’s psychotropic cousin (hemp and marijuana are different varieties of the same species, Cannabis sativa). What we do know about hemp seeds is that they are rich in omega-3s and a type of beneficial omega-6 fatty acid called gamma linolenic acid that’s not found in many foods and may help reduce inflammation (as opposed to some types of omega-6 that can actually promote inflammation). Omega-3s support heart health and brain function, and new research suggests they may offer benefits for people with conditions like inflammatory bowel disease and rheumatoid arthritis.

Hemp seeds are also high in mineral, fiber and protein content, offering almost as much protein per serving as soybeans. Jampolis points out that “unlike many plant-based proteins, hemp seeds are complete protein – meaning that they contain all of the essential amino acids.”

Sesame Seeds : Tiny but mighty, sesame seeds are loaded with many of the same essential minerals as pepitas, but the real stand out is their copper content. Just two tablespoons provides about 80 percent of our daily copper needs; a mineral that supports the health of our bones, blood vessels, nerves, immune system and skin. Sesame seeds also contain sesamin and sesamolin; two phytochemicals that belong to a group of beneficial compounds called lignans, which provide antioxidant and anti-inflammatory benefits. Sesamin is currently being studied for its potential in the prevention and treatment of certain types of cancers and other diseases.

Toasting sesame seeds enhances their flavor and fragrance. The seeds come in an array of colors including ivory, yellow, red, brown and black.

Disclaimer: The information provided here is for general education purposes. Consult a medical practitioner for any health concerns.